A mini car for Volvo

At the end of the 70s I was employed as a graphic designer at the Swedish Television. The salary was low so I had to work beside in order to feed my hungry family. On one occasion one of the heads at Volvo asked me if I could draw a car following ”certain specifications”. I regarded this as a normal request for some ordinary illustrations and agreed to do it. It turned out that they wanted me to design a completely new car. I had misunderstood the mission, but could not refuse.

The car they wanted me to design was to be suitable for travels to work and back. A very small car for one to two persons. It should have a formula 1 appeal and at the same time be safe. These were the premisses for the design. I got a week for sketching a suggestion.

I started by placing driver and passenger diagonally in order to reduce the front area. The width between the wheels was normal for a small car. By reducing the width of the coupé itself space was gained to be used for side impact protection. Because of the placing of the passenger the driver could also enter the car from the right via a gull-wing door. This arrangement was good for safety.

I chose to place the front pair of wheels in separate houses both in order to gain a racing-car feeling and to make it easier to park. Behind the driver there was space enough for placing a seat for a small child. 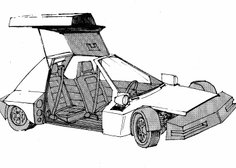 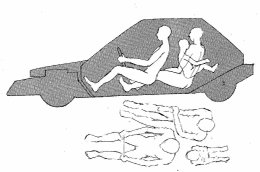 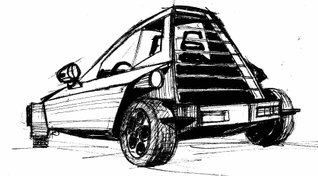 Those sketches of mine were approved by the Volvo people and I was asked to continue the work of designing the car by making a model in the scale of 1:10. From their own design department I got four suitable wheels. I had long experience in making model airplanes in balsa wood, so it was natural for me to choose this material for the model of the car. In two weeks it was ready, and once more the design was approved by Volvo. They made a mock-up in full scale for testing and also a mock-up of the coupé for interior tests. They also asked me to to design the complete interior. This was really a big challenge for me since I had no driver´s license at that time.

Volvo planned to manufacture the car in Norway. It was meant to be made of plastic and alloys. The state of Norway was to be a partner in this project to make it possible. But the so-called Norwegian affair failed, and the whole mini car project was abandoned.

I got paid for the work I had done so far. I thought the whole project was forgotten for ever because a simple commercial artist with no experience of car design had outclassed Volvo´s own design department. But in 2011 Volvo published a book entitled Prototypes of Volvo in which my name was mentioned. Below is the page in question from the Swedish edition of the book. The pictures show my balsa model. 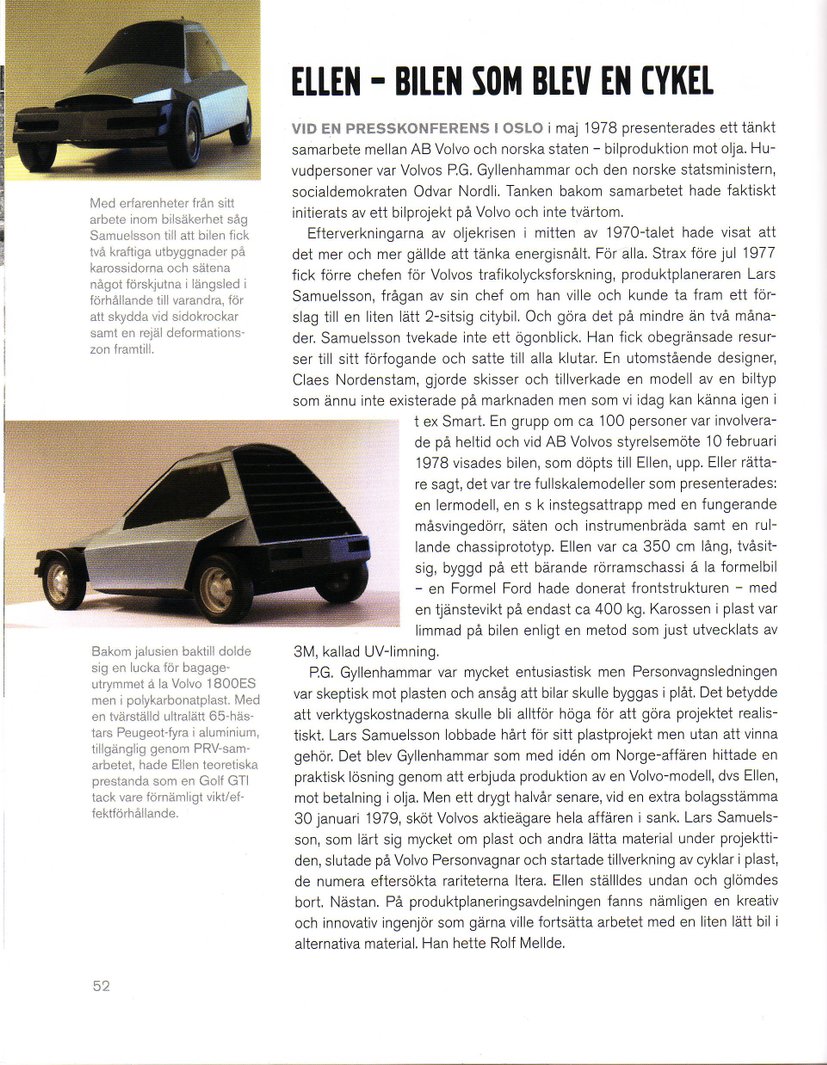 The abortive car project led to an interest in making other products in plastic. Two directors at Volvo decided to make a bicycle this way and asked me to design one. After some weeks I presented a suggestion. My idea was to make it as comfortable as possible – a unisex design. The frame was made of two pieces on each side united by the saddle pole. The wheels were designed to be made of plastic also. Following my drawings a professional mock-up craftsman made a full scale model, which was painted golden in a very high finish. 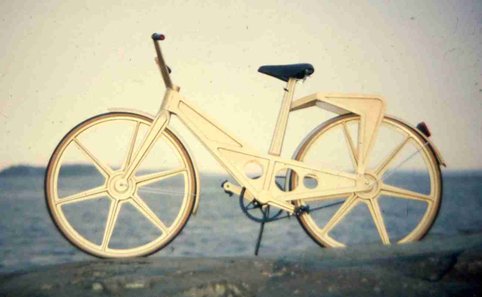 By using this golden bicycle and a good portion of eloquence the directors succeeded in getting a loan of 25 million Swedish crowns, which they didn´t have to pay back until the whole project had become an economical success. Experts at the German BASF got involved and made a new design of their own. It was ugly and very heavy, but you could ride it. Then I started to make a new design. I ignored the German idea completely. Instead I used my experience of making flying model airplanes to solve the problem of combining strength and low weight. I made another prototype in balsa wood. Following my new design the final Itera bicycle was ready about a year later. It was the first serviceable plastic bicycle on the market. 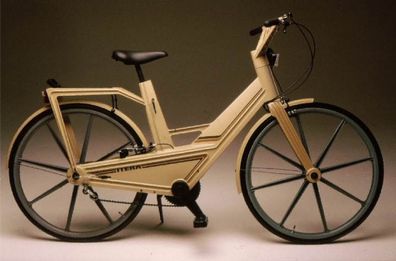 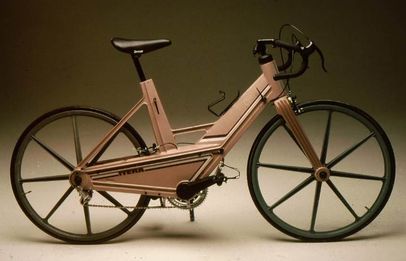 But success didn´t come. After three years the Itera company was broke. Instead the bicycle became an object for museums round the world. As a designer I am now represented at MOMA, Design Museum in London and many other places. The picture to the right is from the design museum in my home town.

Why the bicycle didn´t succeed is question a lot of experts have tried to answer. 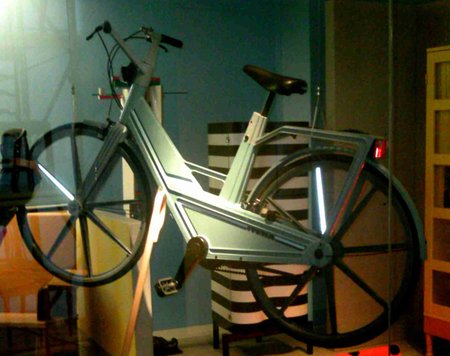 About twenty years ago a business friend of mine came up with a good idea. He had observed that fathers don´t usually make big toy cars for their children any more. He inspired me to design a kit for making such things. The whole project remained on the drawing board for many years until an old friend, a talented engineer from the time of the plastic bicycle, asked me to join a new project, a kit for making big toys. The idea came from a former multimillionaire and toy manufacturer, who envisaged a new market. I showed him my sketches from the past and he expressed that this was exactly what he wanted. 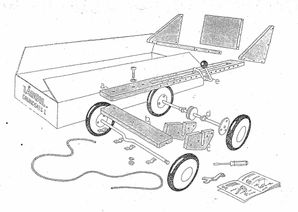 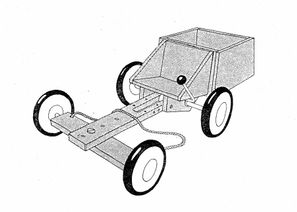 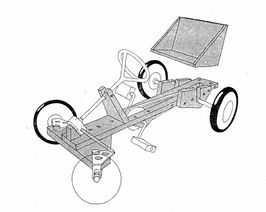 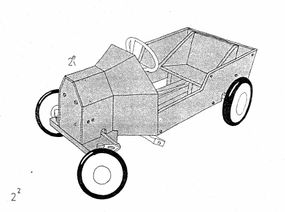 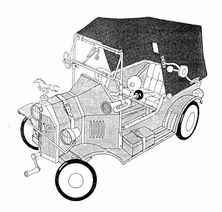 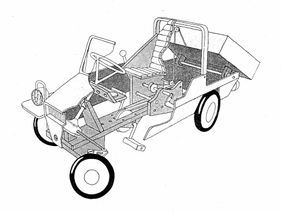 But I was not content with this and began to think of better solutions. Why not make a giant meccano? By using flat perforated boards in combination with bolts, nuts and angled parts it would be easy to construct anything. As working material I chose 5 mm lettex, a product consisting of two layers of cardboard with foam plastic in-between. It was ideal for working fast in the practical design process and it could later be replaced by plywood in the final product. A fortnight later I had finished two prototypes, a walker and a car. 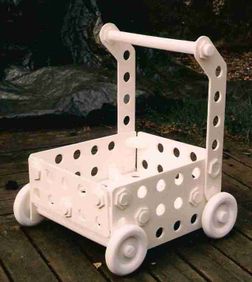 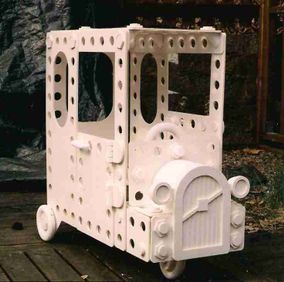 The idea was that some of the parts for the walker should be usable later for making a car, when the needs of the child changed. During the practical work with the prototypes I was confronted with the problem of how to connect the parts to each other. Instead of using an angled piece in combination with two bolts I put these three parts together in just one piece. The ”Maxamec Connector” had been invented. Later the engineer got the idea of using plastic bottle caps instead of nuts. In this way it became easier for children to use the toy.

The three of us, the former multimillionaire, the engineer and myself, formed a company for proceeding with the project. A year later we had a usable prototype with the right materials, plywood boards and injection moulded plastic parts. 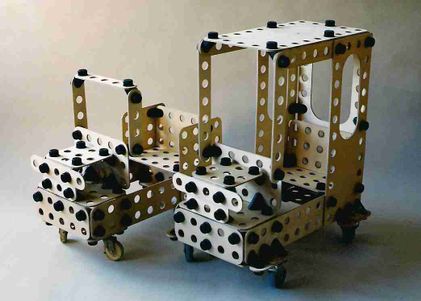 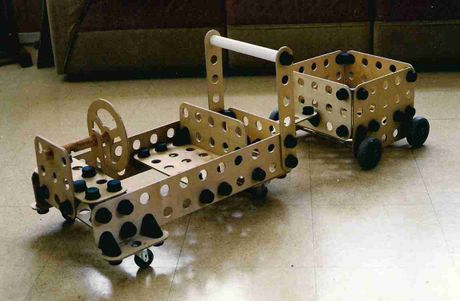 Now I really began to play seriously. Soon I realized that is was neccessary to reduce the number of different parts by just having square boards fully perforated with holes. As shown here above this didn´t limit the possibilities for making different models at all.

The toy got colours and a name – Maxamec. We started the production in Lithuania and soon the money would float into our little company. 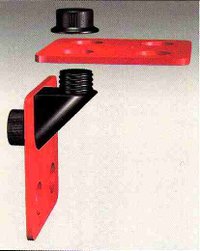 The most important part in the construction kit was the connector. It turned out to be a novelty which was patentable. We succeeded in getting patent grants all around the world.

The former multimillionaire was very successful in getting investors for the project, mainly in the USA. In this way patent grants, development and production were financed. 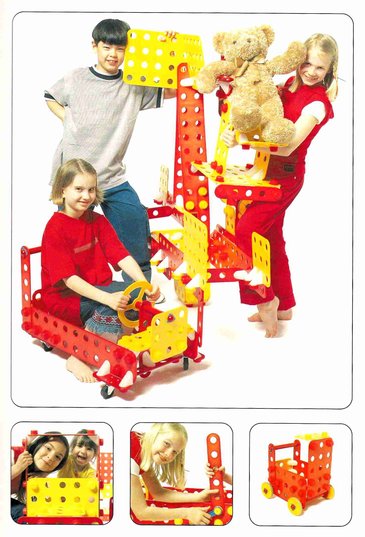 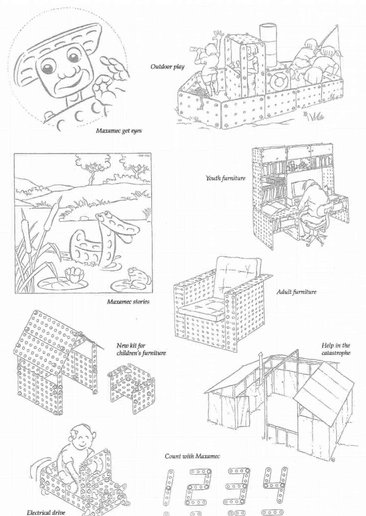 All began very well and the number of people involved increased rapidly. The production went on in Lithuania, and after that in China, where the plywood was replaced by plastic. Big plans for the future were made. The connector could be used for many other purposes than just the Maxamec toy, for instance furniture and houses.

I designed hundreds of models together with instructions. I also created a comic paper to support the marketing of the toys. (More on that under the heading ”Graphic”.)

The production in China was a big mistake. The people there were only interested in making their own money by marketing the toy out of our control.