For a period of ten years I was employed at the Swedish Television as a graphic designer. Among my tasks was to provide TV-programmes with texts and other kinds of graphics for the screen. In those days we had no computers for creating texts so the letters had to be made by hand. The most common way to show text on the TV-screen was and still is to superimpose it as white letters on the live picture. We used white letters on black cardboard in front of the camera in the TV-studio. The problem was to make those cards in a rational way. My solution was to use white transferable letters (Letraset, Mecanorma etc.) on black cardboard. This implied difficultes in setting the letters in a straight line, because a guideline drawn on black cardboard is hard to follow through the sheet of letters. To solve this problem I made a kind of drawing board with a part which could slide up and down and on which the artwork could be fixed by tape. The board was fitted with a transparent sheet with a hole for lettering. On the lower edge of this opening there was a white guideline, visible through the sheet of transferable letters.

Now we could produce the graphics for the studio very fast and easily. The selection of typefaces of different suppliers meant great freedom in design.

One day a visiting salesperson from one of those suppliers saw my letterboard. She was impressed and exclaimed, ”The inventor of this thing must be very lucky!” I didn´t tell her that it was me, but a few days later I went to a patent office. In time I got a grant for a Swedish patent. It was a very expensive thing for a poor designer, but I had high hopes that the big money would soon pour in. It didn't. After that I decided never to finance a patent on my own. Below is a page from the patents file. 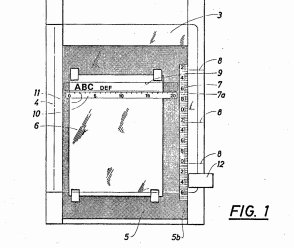 For some years I cooperated with White Design, a company in Gothenburg. Among the projects was a proposal for upgrading some of the trams in the city. During our daily walks for lunch we noticed that the road signs were an ugly and disturbing feature of the cityscape. That led to the study ”Road Signs”, which was financed with money from the state. The result was a publication on this subject where we amongst other things analysed the basis for new design. This inspired me to make a proposal of my own for new road signs. The ugly mounting on the rear of today´s road signs was the most prominent aesthetic drawback. My idea was to cover this inside the sign. Another advantage of this arrangement was that it became easy to change the road sign if needed. I got White Design to finance the patent and market it in exchange for future earnings. Unfortunately the project didn´t succeed. 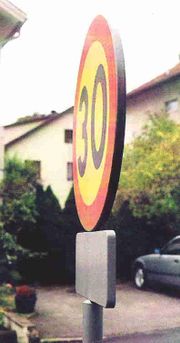 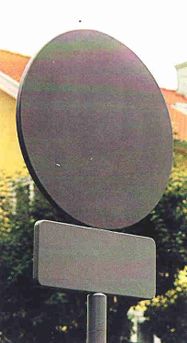 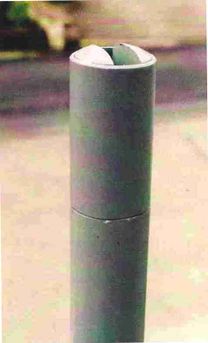 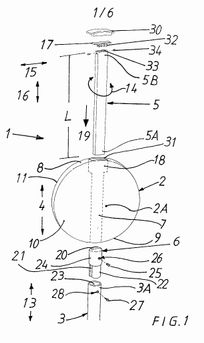 Patents during the time with Maxamec

During the seven years I worked with Maxamec I produced some technical solutions, which later became patented. Some of them were worked out in cooperation with the engineer, others were completely of my own. It started with the Connector, a kind of angled bolt for connecting perforated boards in a straight angle to each other. Three parts (two bolts and an angled plate) are joined in one piece, which has the additional advantage of preventing the bolt from rotating when a nut is attached to it.

The connector can also be used in other fields (see Design). 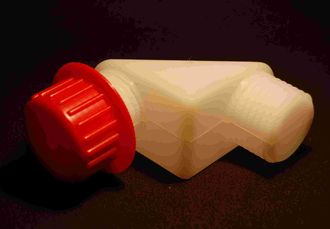 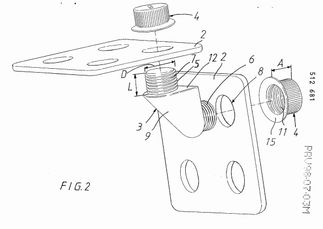 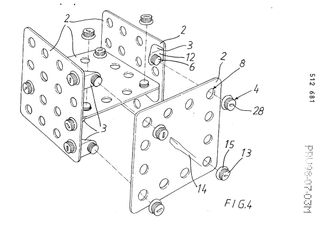 2. A tool for the grooved Maxamec nut

The nuts for Maxamec were provided with a flange to obtain better locking to the boards. To make them easier to handle they were provided with grooves, like bottle caps. Soon we realized the those grooves could be used for making a special wrench for harder fixing of the parts.

3. Design for injection moulding of the connector

In order to make it easy to mass-produce the connector we made a design for injection moulding. Two half shells were connected at one side, which could then be folded together. 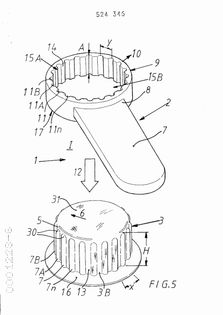 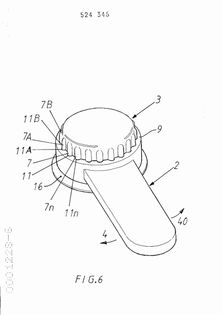 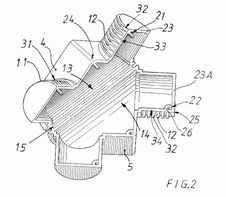 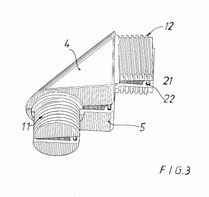 The nut of the toy and the tool described above led to this idea. Together they were very effective and easy to handle, especially in combination with the nuts flange. Why not replace the standard hexagonal nut with something on those lines? I designed a nut with six ribs to make it compatible with standard nuts. It had many advantages, not only from the functional point of view but also with regard to material efficiency. A patent was granted, but the project was stopped by an incompentent major shareholder. The nut deserved a better fate, just think of the whole car industry. 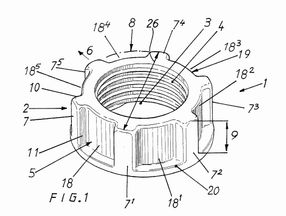 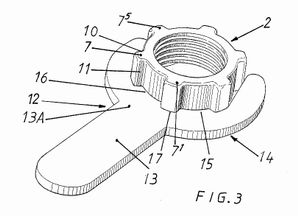 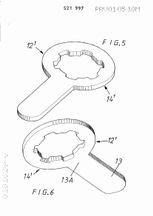 Though the connector was comparably easy to produce I couldn´t stop thinking of a product which was finished when leaving the injection tool and which could be made of harder material, if needed. I realized that the thread of the bolt didn´t have to be continuous. It was enough that the thread in the nut was like that. This opened up for a solution where the final product could leave the two halfs of the tool directly. A patent was granted. The technique could also be used for single bolts, which meant easier production and less material. 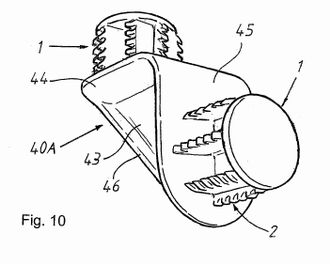 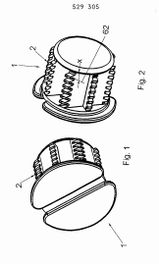 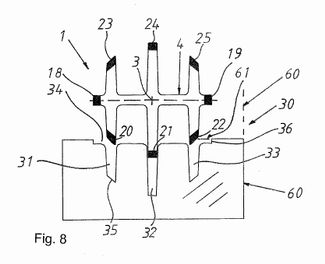 Comments on the patents for Maxamec

Working creatively in small groups sometimes leads to the delicate question, Who had the bright idea first? For social reasons there are often more than one inventor in patent registrations. But this is not always the whole truth. Patent number 1 is entirely my own invention, except for the nut which was made in cooperation with the engineer. Patents 2 and 3 were the results of cooperation between the engineer, a plastic specialist named Per Larsson and myself. Number 4 is mainly my invention, with the engineer in the role of a conversation partner. Patent 5 is entirely my own invention. When I had left Maxamec the engineer and the ex multi-millionaire took my drawings and applied for a patent. The last mentioned person´s contribution to the patents consisted solely in financing them.

Dixi – a system for carrying signs (only design registration)

Working as consultant for the regional public transportation company I got various tasks related to the display of signs. Amongst other things, there was a need for new sign carriers at bus and tram stops. I designed a carrier system based on the existing system of 60 mm tubes which were pressed into larger aluminum tubes with fitting inside grooves. By combining a few different parts a suitable carrier could be built up. For economical reasons the design was protected only in Sweden and Germany. 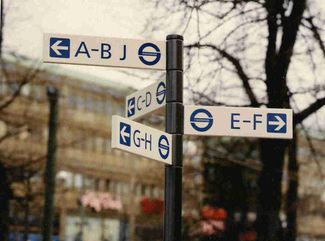 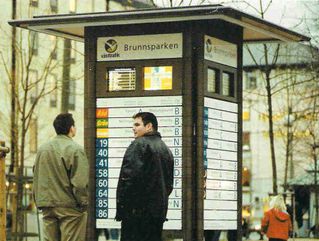 Rondo – a stand for bicycles (only design registration)

The manufacturer of Dixi wanted me to design a new bicycle stand that could be used in their existing weather shelters. It was demanded that the stand should be fixed at two points but still be flexible in size. I excluded using only the front wheel for holding the bicycle. The deck dimensions of bicycles are so varying nowadays. In cooperation with the engineer I designed a solution where the bicycle frame is supported and can be easily unlocked. The stand can also be used for advertising or information between the pockets. 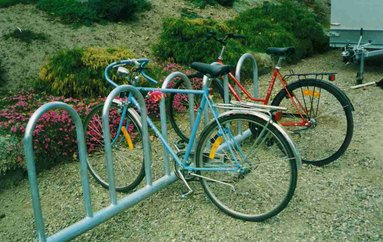 My old mother in law inspired me to this invention when she began to loose her hearing ability. Standard hearing aids are complicated to handle in many ways. Battery change, off and on and adjustment are often so difficult that many don´t use their hearing aids at all. People who have hearing problems often find it easier to communicate via telephone than live. This gave me the idea of combining a headset with a microphone in a certain way.

The combination is not a new idea in itself. You can find several hearing aids working on those lines on the market.

The new idea was to place two microphones inside the headset so that the device starts automatically when the user puts it on his head and turns off when he takes it off.

Hearing problems also means difficulties to separate sounds from various directions. The stereo effect is caused by the difference in phases between the two ears. This delicate ability is partly lost when one gets hearing problems.

By using two microphones with good direction performance it is possible to compensate for this handicap and give the user the possibility to concentrate on a specific sound.

It turns on and off automatically. You can load it by placing it on a stand, which is a loading station; no change of batteries. When the user turns his head in a certain direction, the sounds from there get clearer. Easy to use – just put it on.

Eraid is patentable. Research in main patent registers has already been done. I have tried to have the costs for a patent financed by the state, but could only get half of it. For the time being I have put the whole project on the shelf.

I welcome an entrepreneur who is willing to take over the project. No details have been revealed concerning the patent claims, so it is still fully possible to get one. If you are interested please mail me. 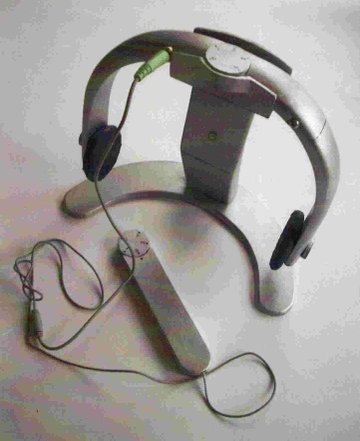